I brewed an extract version of this Christmas Belgian Dark Strong last year which was a big hit with all who tried it.  It was such a fun beer to brew and drink, that I thought it would become a seasonal brew for me.  Now that I’ve moved to brewing all grain batches, I was hoping to make it even better this year.  My goal was to brew this in August or September so the flavors would have enough time to meld together before December.  Alas, life got in the way and it got pushed back to November.  Oh well, if all goes well it’ll be pretty good around mid-December, even though it’ll probably peak early in 2016.

So on the first Sunday in November, I set out to brew this recipe for the 2nd time (first time I rebrewed anything) using the all grain method.  Unfortunately, I didn’t adjust my BeerSmith2 profile for my equipment and didn’t use enough water in my mash, so my 6 gallon batch turned into about a 4.5 gallon batch.  While it’s not fun to miss the mark, it’s all part of the learning process, and all the mistakes I make help reshape and hone my skills for future batches (see blow off pic below).

FYI, always use a blow off tube. This was 2 days after pitching and a violent fermentation. Fortunately, I caught it early and was able to avoid a messy clean up as everything stayed on the lid.

Now, I have recently been making yeast starters and have noticed the beers start showing signs of fermentation within hours of pitching.  Starting with a sufficient amount of yeast in good health can only improve the beer as they won’t be stressed out.  Here’s a handy calculator from Brewer’s Friend that I use to determine how big a starter to make and how many yeast cells I need.  Typically, I shoot for around 300 billion cells for most 5-6 gallon batches.  My starter this time only yielded about 200 billion cells, so I pitched an extra vial of yeast (100 billion cells) to be safe.  Because my batch turned out smaller than normal (4.5 gallons) and I was using a 6.5 gallon bucket, I was fooled into thinking I had plenty of head space and didn’t need to utilize a blow off tube.  A simple three piece airlock should be sufficient, right?  Wrong!  Whether it was the health of the yeast, the extra 100 billion cells, the warmer temperature (68-70F or so), or a combination of all factors, the fermentation took off vigorously and I came home from work after day 2 and found the krausen had blown through the airlock and spilled out onto the lid of the bucket.  Fortunately, that was the extent of the mess because I’ve read of other blow outs that left gunk on ceilings, floors, walls, surrounding furniture, etc.  Believe me, that stuff is sticky and difficult to clean up.  I cleaned the lid and the airlock, and then fashioned a blow-off tube to avoid any future problems, although, most of the fermentation had already taken place. 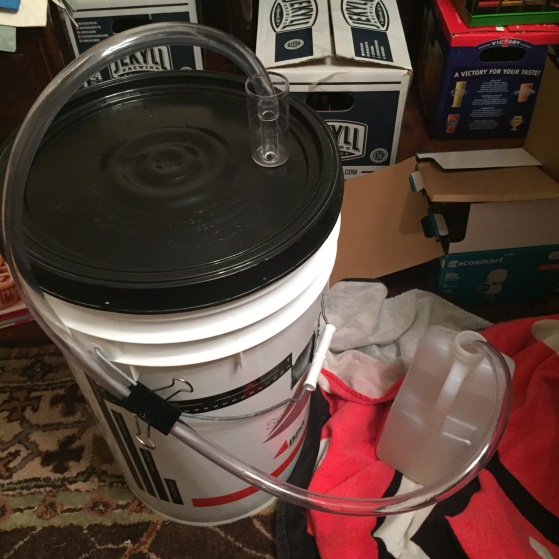 After cleaning up the mess from the blow out, I setup a blow off tube using the base of the three-piece airlock, 1/2″ tubing and container of sanitized solution.

(currently bottle conditioning)
edit: 12/22/15 – Not carbonated yet.  This one may take awhile as it’s high gravity and was cold-crashed plus fined with gelatin.
edit: 12/29/15 – Still not carbonated.  Also, I noticed some “floaties” in the bottles, but after chilling my test beer for 24 hours, the “floaties” settled to the bottom and I had a crystal clear pour…no carbonation, but no “floaties” either.  I’ll probably wait another month before checking again.

edit: this took about 7 weeks to carbonate.  The final product is a very nice Belgian that finishes on the sweet side with hints of the coriander and orange peel.